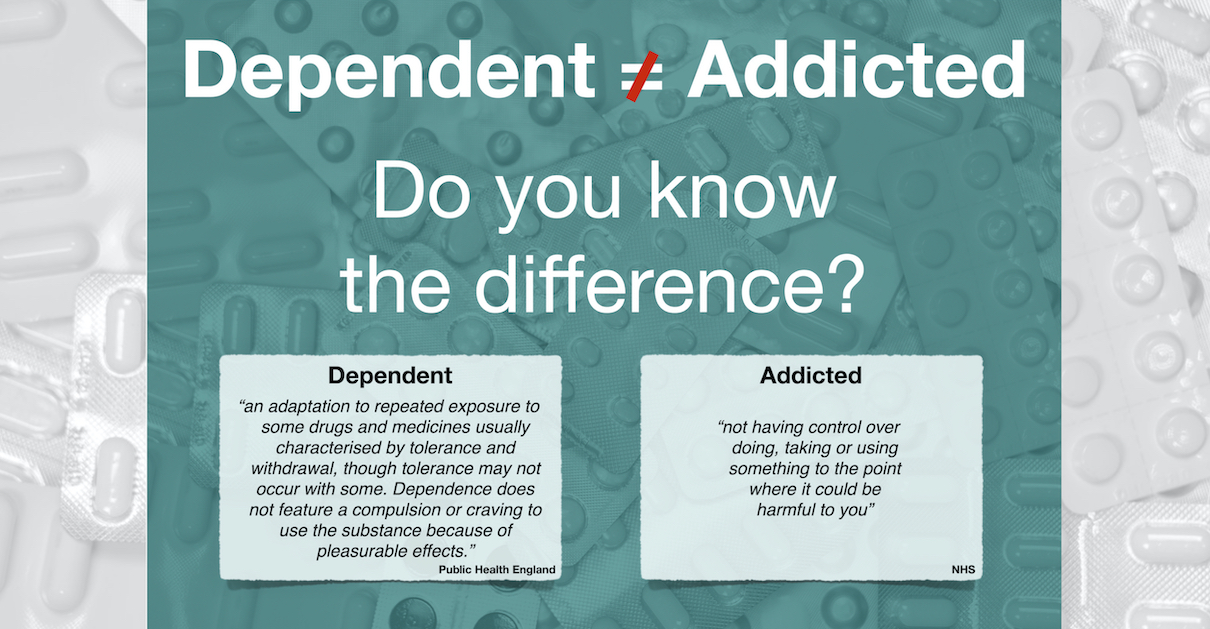 In the media, it is common to find the language of prescribed and illegal drug use to be used interchangeably. Most commonly this means applying language associated with street drugs such as ‘addicted’, ‘user’ and ‘cold turkey’ to issues involving prescribed medications.

This language is emotive and powerful but could mislead viewers, readers, and listeners into assuming that there is no difference between prescribed and recreational drugs. There is some overlap between the definitions of addiction and dependence, but both the pharmacological action and the circumstances of use are different enough to not be synonymous.

The aim of this note is not to diminish the personal experiences of those who describe themselves as addicted but to make sure that language is used that is sensitive to individual circumstances.

Addiction Versus Dependence, What’s the Difference?

Addiction – The NHS defines ‘addiction’ as; “not having control over doing, taking or using something to the point where it could be harmful to you”. This is a broad definition which can apply to many things (including online gaming, sex, food and of course illegal drugs), but most often used where street drugs are concerned. The term ‘addiction’ tends to be most frequently used when someone is dependent on a substance, when there is a compulsion or craving to keep using it, and when people seek out increased doses to achieve the desired effect. This compulsion can be said to represent a behavioural (or psychological) need to use the drug. Often, but not always, the desire to use the drug is because of its pleasurable effects. Addiction is thought of as both a physical and mental reliance on a substance.

Dependence – The recent Public Health England report into prescribed drug dependence defined ‘dependence’ as; “an adaptation to repeated exposure to some drugs and medicines usually characterised by tolerance and withdrawal, though tolerance may not occur with some. Dependence does not feature a compulsion or craving to use the substance because of pleasurable effects.” Dependence is, therefore, the need to continue to use a drug even when there is no benefit and to avoid unpleasant drug withdrawal effects when stopping. The use of some medicinal drugs likely causes physical changes in the body that are uncompensated for when the drug is reduced or stopped. These physical changes are responsible for withdrawal effects and can sometimes persist long after the person has withdrawn.

Public Health England distinguishes ‘dependence’ from ‘addiction’, saying that addiction is; ‘dependence plus a compulsive preoccupation to seek and take a substance despite consequences’.

Why is This Distinction Important?

It does a disservice to both those who are dependent or addicted to label them as the same and it could mistakenly give the impression that the treatment for both issues is the same. Current addiction treatment centres are quite different from the (few) services available for people dependent on prescription drugs and tend to focus both on gradual withdrawal and helping the person with psychological support to avoid the compulsion to use the drug again. For those dependent, the focus of help is in gradual dosage tapering. People stopping prescribed drugs usually report no desire to recommence the drug after coming off.

It is completely acceptable for an individual to describe themselves as ‘addicted’ if that phrase has personal meaning for them, but it is incumbent on media professionals to report accurately and not to impose a label.

Where we are talking about prescribed drugs, the term dependent or dependence more accurately describes the situation since the person is relying on the drug for medical reasons. For people who try to come off the drugs and experience problems, the preferred term is drug or medication withdrawal. Some professional medics prefer the term ‘discontinuation’ but this language arose from the pharmaceutical manufacturers who wanted to downplay any idea that psychiatric drugs could be dependence forming.

For illicit or street drugs, we argue that the term dependent is, again, more sensitive to individual circumstances than ‘addicted’. Not least because not all who use illicit substances are doing so to get a pleasurable effect. A good example is the use of cannabis to manage pain or seizures. Cannabis is currently an illicit drug (although being trialled for medicinal use) that is commonly used to manage pain rather than for pleasurable effects. Both a medical and a non-medical cannabis user could be said to be dependent, but it could be misleading to say that the person using it for medical reasons is addicted, particularly if they are following their doctor’s guidance.

Finally, the term addicted has incorrectly come to be associated with a lack of willpower or the presence of personal weakness (for example, my friend has an ‘addictive’ personality). This judgemental term does little to gain the recognition and support that the person needs to help overcome their struggle. If this term is used for someone who merely followed their doctor’s advice, it is demeaning and adds insult to iatrogenic injury. For this reason, dependence is suggested as more sensitive terminology.

One difficult area is in opioid pain medication (such as Oxycodone or Fentanyl). Opioid drugs are a derivative of opium which is classified as a highly addicting substance. However, even here, prescription opioid users are seeking the absence of pain, not the presence of a euphoric state.

Doctors will sometimes reject any suggestion that psychiatric drugs can be addictive. As far as the technical distinction between dependence and addiction is concerned, this is correct. However, it would be misleading if the assertion that psychiatric drugs “are not addictive” were used to imply either that the drugs are without risk, or that they cannot lead to dependence. It is important that media reporting of this does not downplay the risk by saying the drugs are not addictive, but clarifies that, for some people, dependence can be a result of using the drugs exactly as prescribed. 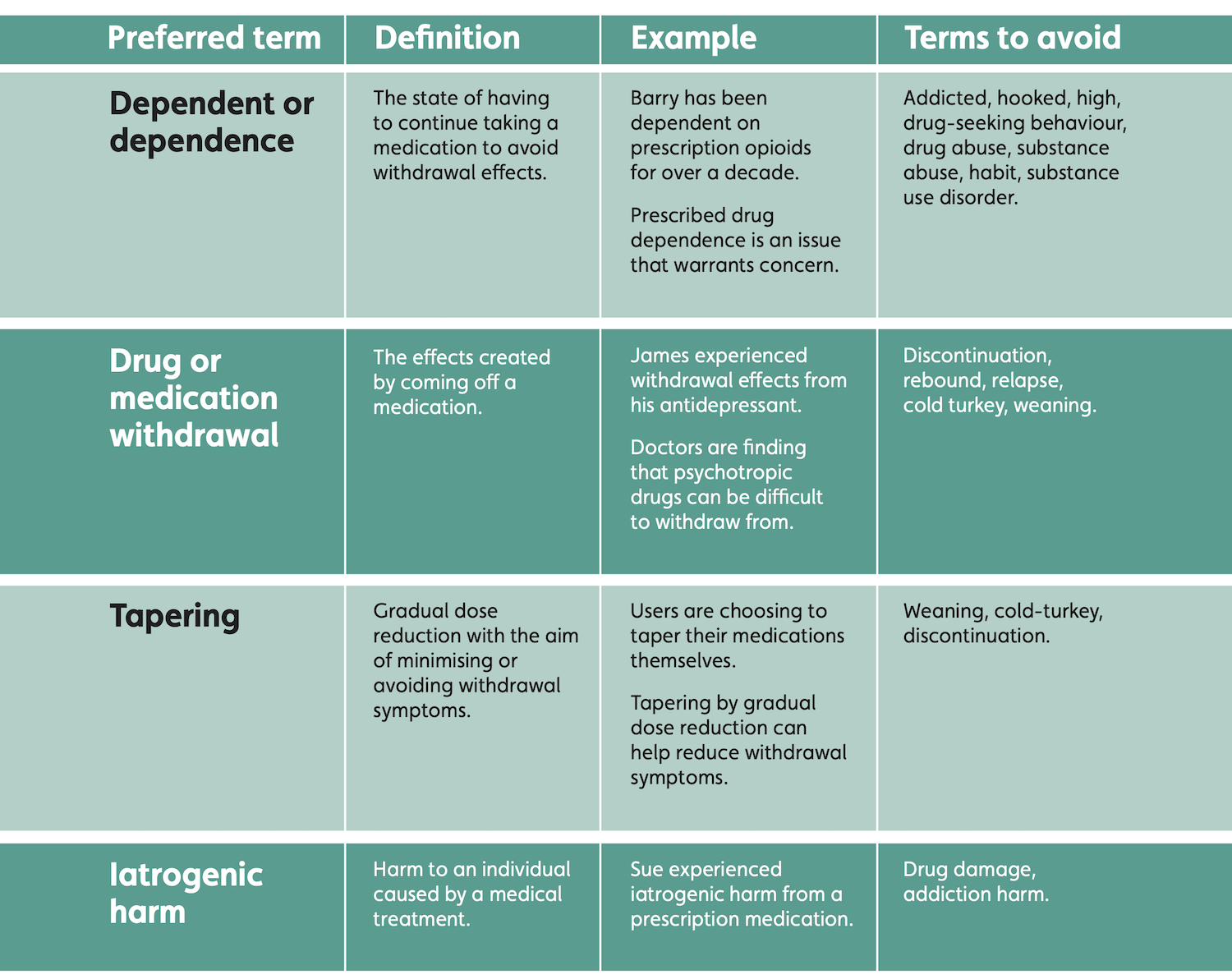 NHS: Addiction What Is it?