Over the last decade, the UK has seen dramatic increases in the number of people prescribed psychiatric drugs. In the British National Formulary, Chapter 4 represents Central Nervous System drugs including antidepressants, antipsychotics, anxiolytics, antiepileptics and sedatives. The total numbers prescribed have increased by 50% across the whole chapter from 138 million in 2007 to 208 million items in 2017.

Both the Scottish and Welsh Parliaments have been debating the issues surrounding the overuse of psychiatric drugs. They have been encouraged into action by petitions launched by those with lived experience and therapists who have witnessed first-hand the terrible difficulty that some people can have coming off psychiatric drugs.

The Welsh Assembly published their report on March 21st. Among the ten specific recommendations is the need for greater recognition to be given to prescription drug dependence at a national level in both policy and strategy. In addition, they commit to investigate, as a priority, the potential for national rollout of a Prescribed Medication Support Service in order to ensure that specific advice and support is available for people who require assistance with prescription medication.

The Welsh petitioner, Stevie Lewis, responding to publication of the Welsh Assembly’s report said: “The Welsh public petitions process has turned out to be truly democratic and empowering. All those who provided evidence to my petition were listened to with attention and respect. The committee has taken seriously my contention that we need to be able to hold as true two apparently conflicting beliefs about antidepressants at the same time, namely that they can help people and also that they can harm people. And once a patient has been harmed by any drug that causes dependence and withdrawal, there are no nationwide NHS services in place to guide and support their recovery. I look forward to hearing the Welsh Government debate this issue in the Senedd.”

In Scotland, the petitioning process has yet to reach reporting status. At its most recent meeting, the Scottish Parliament Petitions Committee agreed to defer further consideration of the petition until after the Scottish Government Short Life Working Group (SLWG) on prescription medicine dependence and withdrawal has reported its recommendations (due in 2019). The petition Committee has been urged to request that: “the full evidence of this petition … be taken into account by the SLWG as formal evidence of Experts by Experience”.

The Petitions Committee received an astonishing number of written testimonies from people reporting severe symptoms when stopping psychiatric drugs and full evidence is published online. A collated ‘Voice of the patient’ report has been compiled from Scottish and Welsh Petition evidence and submitted for the Public Health England review.

Marion Brown (Scottish petitioner) said “due to the absence of research into the real-life outcomes for patients, I believe that this published patient experience evidence is unique and immensely important. I thank all those who have contributed and the Petitions clerks for their work in processing the submissions, and trust that this will be fully taken into account as ‘Expert by experience’ evidence for the Short Life Working Group.”

General Practioner Doctor Noel Thomas, said: “After nearly four decades as a full-time valleys GP,  followed by another decade of part time work, seeing patients from many different practices , I have become increasingly alarmed at the number of patients who take one or more psychoactive drugs, often for years, and often for reasons that are lost in the mists of time. Many people have never discussed whether they should stop, some have tried to stop and failed. Some would like to stop but are afraid to try. This report is a very encouraging initiative, but if good is to come of it, patients and doctors must be made aware of its reasoning and recommendations and be prepared to change.”

The actions taken by the Welsh Assembly and Scottish Government arise at a time when England has committed to a national, Government-led review that considers the support needed people affected by prescribed drugs associated with dependence and withdrawal.

These policy-level discussions and debates show clearly that we need a national conversation on the informed use of psychiatric prescription drugs and that a UK-wide strategy is required to respond to the issues of dependence and withdrawal that potentially affect millions of people. 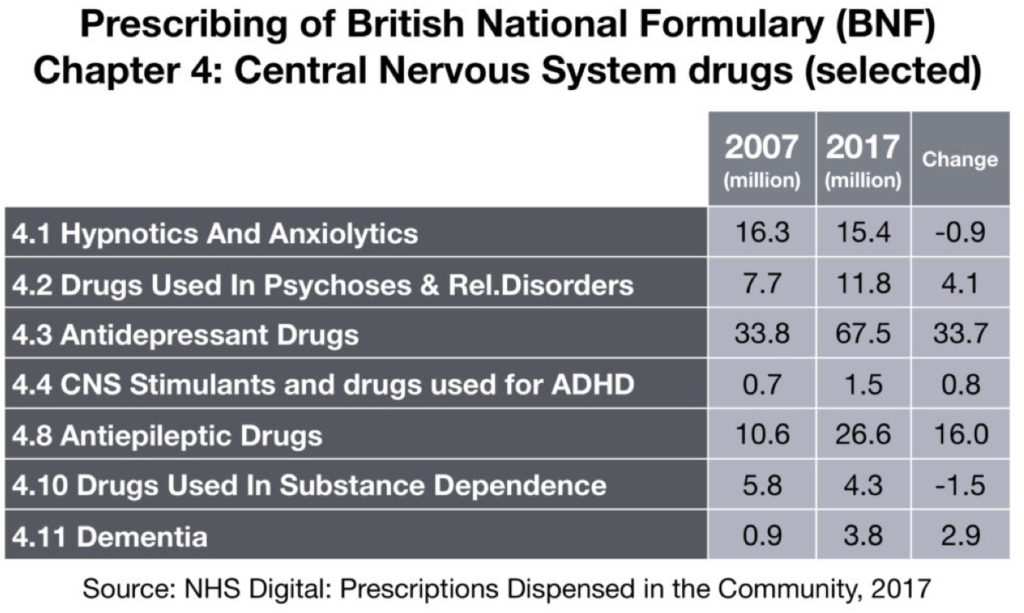